Movies Silently is hosting the Swashathon or the Swashbuckler Blogathon, and I could not pass this opportunity by to review Randall Wallace’s “The Man In the Iron Mask” (1998). As many of you would know, today is also Bastille Day or la Fête nationale in France, which provides for another excuse to delve into a film portraying France. Here, despite many critics’ allegations that “The Man In the Iron Mask” is laughable, flimsy and disrespects the novel by Alexandre Dumas it is based on, the film is actually an enjoyable ride from start to finish. If the audience does not take this film too seriously, and allow themselves to be carried away by the plot, action and the humour, they are in for a treat. The visuals are delightful, the music composed by Nick Glennie-Smith is great, and the film has a cast many directors would “die for”: Leonardo DiCaprio (“Revolutionary Road” (2008)), John Malkovich (“The Portrait of a Lady” (1996)), Jeremy Irons (“The Correspondence” (2016)), Gabriel Byrne (“I, Anna” (2012)) and Gerard Depardieu. 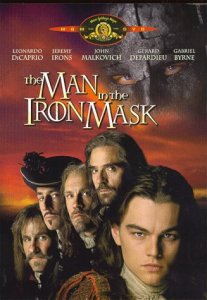 “The Man in the Iron Mask” is inevitably one of those films which will be enjoyed by the general public/audience far more than by seen-it-all-before critics. The story here is interesting enough. In the reign of King Louis XIV (played by Leonardo DiCaprio), there are wars with the Dutch and bloody riots in the homeland. However, the young King, who is somewhat heartless and ill-tempered, is far from being concerned about these things, and would rather spend his time throwing lavish parties and pursuing women. One of the women he set his eyes on happens to be Christine (Judith Godreche), the fiancee of Raoul (Peter Sarsgaard), who is the son of Athos (John Malkovich), one of the musketeers. The King promptly sends Raoul away from his beloved to the war, where Raoul is purposefully killed, and this occasion widens the gap of hostility between the musketeers and Louis, whose confidante remains D’Artagnan. Moreover, as Louis instructs Aramis to find and kill the leader of Jesuits (who is, secretly, Aramis himself), the three men envisage the plan: to replace Louis with his identical twin brother Phillippe (Leonardo DiCaprio in a double role), who happens to be in a guarded prison.

Even though the plot is fantastical, it is loosely based on historical facts. Circa 1660s, a prisoner was arrested and imprisoned under the conditions shrouded in secrecy at numerous prisons in France. For example, his face was to be covered, his cell was to be guarded by triple doors to reduce the risk of eavesdropping, and he was forbidden to speak to anyone about anything. These facts gave rise to many speculations as to the actual identity of the prisoner, and why he should be kept under such mysterious conditions. Dumas took this story and theorised that the prisoner, named “Eustache Dauger”, was actually the twin brother of Louis XIV. Thus, the major appeal of “The Man in the Iron Mask” lies in the fascination with identical twins, and in how one brother can replace another brother on the throne without anyone knowing. More recently, however, Professor Paul Sonnino stated that he uncovered the true identity of the prisoner – it was the valet to the treasurer for Cardinal Mazarin, some French Minister at the time. The valet never revealed his face to visitors because his employer was involved in the illegal accumulation of wealth, including possibly robbing the English royalty. Apparently, the valet was imprisoned for admitting the sins of his employer, and was told that he would be killed if he ever revealed his true identity (see here).

It is relatively easy to spot all the negative things about this film. The constant pulling of emotional strings may be over-bearing; the French are americanised here (even though a number of French actors are involved); and banality may be found almost everywhere. And, of course, technically, this film is a bit disastrous. The French trio of Musketeers in the film speak with different accents, for example, Porthos (Depardieu) with his French (as he should do) and Aramis (Irons) with his British, and even D’Artagnan (Byrne) sports an Irish accent. Moreover, Louis (DiCaprio) himself speaks nothing but American English. But, apart from all that, its the over-use and over-doing of humouristic sequences, largely provided by Porthos (Depardieu), from which stems the unfortunate cinematic disenchantment. The so-called “funny” scenes in the film, such as those involving naked Depardie in a farm shed, are really needless in this film, and almost take this film to a completely different genre, that of comedy.

Despite the criticisms above, there are also tons of things to like here. The cast and its acting alone make this film the one to watch. All the musketeers in the film could not have been more different from one another, but all of them share close friendship and devotion to the cause, and this is all rather moving. Irons is one’s perfect Aramis, a serious and deeply-religious man, who we see get in an argument with the frivolous and fun-loving Porthos (Depardieu) in the very first scenes they are together. Then, there is Athos played by John Malkovich. He is the one devoted to his son and his King, but when circumstances change, he becomes the first to take a sword and seek revenge. Previously playing secretive and double-faced Osmond in “The Portrait of a Lady“, Malkovich’s transition from a doting father to an almost maniacal revenge-seeker in this film could not have been more in line with what this actor could do best, even if, ultimately, it was an “overkill” performance. Byrne as D’Artagnan is also good. The actor’s looks and personality are almost a synonym of the word “chivalry”, and it is easy to see why we see him before any other musketeers in the film.

It is great to watch these great actors interacting with one another, and the plot becomes more and more entertaining as it moves along, involving tense action sequences (musketeers using rapiers and other armoury), as well as touching love scenes, for example those between D’Artagnan and Queen Anne (Anne Parillaud), or between Raoul and Christine. In other words, “swashbuckling” all the way: everything, from the attempted assassination of the King to the prison break will be covered, and the audience will have plenty of intrigue throughout, and even a “twist” at the end. Couple all this with some amazing costumes provided by James Acheson and some stunning cinematography by Peter Suschitzky, and the result is that the audience will even overlook the fact that DiCaprio struggles a bit to provide a convincing and subtle interpretation of the twin brothers, and, unnecessarily, makes one truly humble and kind, and another too despotic and overly arrogant. Perhaps, he should have sought advice from Jeremy Irons for his role. That man put a little stone in his shoe every time he played Elliot, to differentiate him playing Beverly, two identical twins, in “Dead Ringers” (1988). That way, Irons could create a subtle, barely perceivable difference between two brothers in his acting, rather than be totally unkind to the personalities of both. Then, there is, of course, the soundtrack, which is the thing of sheer acoustic beauty. Composed by Nick Glennie-Smith, it fits the picture to the core, and if the “Surrounded” track is very inspirational and thought-provoking, then the “Heart of a King” track is very moving and unforgettable.

“The Man in the Iron Mask” may not be one’s perfect film: it largely relies on sentimentality to provoke interest; does not even try to break away from stereotypes; and has numerous faults in the technical execution. Having said that, the film still remains very entertaining throughout; the cast and the soundtrack are great; the acting by Malkovich, Irons, Byrne and Depardieu is some joy to watch; the visuals are splendid; and the interesting history behind the film’s story is alone enough to arouse curiosity and excitement. 7/10

19 thoughts on “The Swashathon (the Swashbuckler Blogathon): The Man in the Iron Mask (1998)”