“Cleese’s work [here] is even better than anything he did for the Monty Python troupe. Yes, it’s that good.” (John J. Puccio, Movie Metropolis) 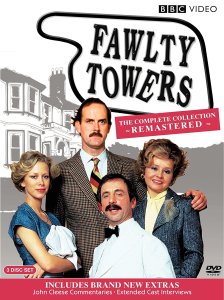 Debbie at Moon in Gemini is hosting The Workplace in Film & TV Blogathon, and my entry is a British TV series from the 1970s called “Fawlty Towers“. Written by John Cleese (“Monty Python’s Life of Brian” (1979)), and Connie Booth, the series has twelve episodes only, with six aired in 1975 and another six in 1979. The series spent some time winning over its critics, despite the love from the audience, but, it is safe to say now that “Fawlty Towers” is a pure classic of the British comedy genre, and is still enjoyed by generations old and young. The series is extremely funny, witty, ingeniously written and staged, and hugely entertaining overall. It will provide anyone not overly familiar with the British humour and mode of life with a real glimpse into the culture. However, that glimpse should never be taken totally serious, because comedy is comedy, and the series will play on some familiar stereotypes and misconceptions, as well as contain some dark humour, including some “shocking” punchlines.

“Fawlty Towers” revolves around Basil Fawlty (John Cleese), a middle-aged owner and manager of the hotel, Fawlty Towers, situated in the seaside town of Torquay on the “English Riviera”. As a hotel manager, Basil is often rude to guests and inconsiderate to his staff, but he “lights up” and becomes overly polite when he senses “class” in his hotel, which may be represented by some doctors or Lords popping in for a stay. As a result, more often than not, his hotel is the very definition of a total nightmare of incompetent and atrocious service. Basil’s wife, Sybil (Prunella Scales), and Polly (Connie Booth), their waitress, receptionist, cleaner, etc. (all in one person) try hard to keep things as decent and pleasant as possible in the running of the hotel, but their efforts are often set-back by the misguided actions and mistakes of Manuel (Andrew Sachs), a Spanish waiter whose knowledge of English is not that good, but who is always well-meaning, enthusiastic and willing to learn.

Why is “Fawlty Towers” such a brilliant comedy? Well, because it is so unassumingly hilarious. Its success largely lies with its written material, and with its bold and memorable characters. The series is what is known as a “situation comedy”, whereby impossible or “clumsy” situations are created, which develop to become extremely funny. In that way, it sometimes reminds of the latter British comedy product “Mr. Bean” from the 1990s. The series incorporates such “controversial” materials and topics to bring funny situations as (i) “death” – a dead human body being moved around the hotel; (ii) Germans and the World War II – Basil injures his head and welcomes German visitors, saying things which he should not; and (iii) sex – during an unusually hot day, Basil witnesses what he thinks are immoral sexual activities going on in his “respectable” establishment. For example, in one episodes titled “The Kipper and the Corpse“, black humour is used to a hilarious effect, as it is about one of the guests dying in the hotel overnight, and because Basil does not have any spare room to place the body for a time being before the caretakers “collect him”, he employs Manual and Polly to help move the corpse around the hotel, so that no guests or the doctor sees it.

The clash of cultures is another interesting aspect of the series. In the episode titled “Waldorf Salad“, an outspoken American comes to stay and orders a Waldorf salad, and hereby the hilarity ensues, because the kitchen is already closed, and “polite” and “serviceable” Basil has to invent ingenious ways to make it “appear” that the kitchen is open and the dish is coming, not even knowing what a Waldorf salad is. Moreover, when his American guests order screwdrivers (a vodka and orange juice cocktail), Fawlty is bewildered why they would want to engage in a DIY job right in the middle of their dinner.

Another brilliance of “Fawlty Towers” is that no character is really truly secondary or the weakest link. Each character is bold and memorable, even if slightly stereotypical. Basil Fawlty is one’s typical cynical misanthrope, but the comedy uses this fact to a great amusing effect. Basil is short-tempered, but his angry squabbles with his guests or his wife are still hilarious. “Whatever you do, don’t mention the war!“, instructs Basil his hotel staff as Germans arrive to his hotel, and what follows is the exact opposite of his instruction with him being at the centre of an outrageous mishap. His wife Sybil is a striking personality too. She is bossy, and Basil is intimidated by her, but she also has her own weaknesses, such as handsome opposite sex, fashion, glamour or simply telephone gossip. Polly, the hotel’s “chambermaid”, represents the voice of reason in the hotel. She often helps Basil to get out of disastrous situations. For example, in one episode, Polly impersonates Sybil when guests arrive to Basil and Sybil’s marriage anniversary party, and Sybil is nowhere to be found.

Manuel, the hotel’s Spanish waiter, is a real “show-stealer”. Ingeniously played by the late Andrew Sachs, the scenes with Manuel are probably one of the most hilarious in the whole series (and I provide an example in a clip from youtube below). “Don’t worry, he’s from Barcelona“, say Basil and Sybil, as though it will explain everything, from Manuel’s “broken” English to his love for his rat (or a Siberian hamster). Terry (Brian Hall), the chef at the hotel, may not be that big as a character, but his sneaky ways of doing things are very memorable, and he has witty one-liners of his own, saying at one point: “what the eye don’t see the chef gets away with”, after the hotel staff considers feeding one of the customers a piece of veal chewed by the cat. Major Gowen (Ballard Berkeley) is a real character in the series. This slightly senile, but amiable old man is a former soldier, and his outdated sexist and xenophobic views both shock and provide comic relief when Basil’s own outbursts take their break. When Basil comments to Major that his tie is too bright for a memorial service he is going to, Major simply replies: “Oh, I didn’t like the chap“, and when Major spots Basil with the corpse of Mr. Leeman for the second time, he coolly asks: “Another one, Fawlty?”, and receives a reply”: “No, same one, Major“.

Why does “Fawlty Towers” provide such a hilariously distorted view of the British culture? Well, because the series uses the British stereotypes and common concepts, and twist them even more to provide amusement. There is a talk of the never constant notorious British weather, and typical British reserve, especially when dealing with strangers, is highlighted. However, perhaps, the topic of British social classes is the one explored the most, because Basil is keen to climb the social ladder, and make Fawlty Towers an establishment populated by Lords and Dukes. In such episodes as “A Touch of Class” and “Gourmet Night” this is made very clear, as Basil there shuns “riff-raff“, which, in his opinion, is the working class, and goes extra length to please one Lord Melbury, who decides to stay in his hotel. Unfortunately for Basil, however, the identities of people he meets are not that clear-cut or obvious, and his efforts to raise the reputation of his hotel are often set back by his staff, for example, by his new chef who likes to drink and falls in love with Manuel, ruining Basil’s chances to impress Torquay’s elite.

“Fawlty Towers“‘ legacy lives on, and the appreciation for the series is world-wide. Not only the series was voted as “The Best British Television Series of All Times” (BFI), but there were even attempts to replicate it in different countries, such as in Spain, and there is now even the Fawlty Towers Dining Experience, for whoever wants to experience what it may feel like to be waited at the table by Basil and Manuel.

If you have not watched “Fawlty Towers” yet, you are in for a real treat. Highly recommended.