Phyllis Loves Classic Movies and The Flapper Dame are hosting the Duo Double Feature blogathon, and this is my contribution to this amazing and fun cinematic race. The blogathon showcases pairs of stars who made only two films together, and my choice is Julia Roberts and Richard Gere, who were in both “Pretty Woman” (1990) and “Runaway Bride” (1999). The onscreen couple consisting of Julia Roberts and Richard Gere may not be the most “homogeneous” of couples ever (for example, because the individual differences still show), but, in this case, it is the case of opposites attracting. The result is the onscreen chemistry which is palpable and undeniable, and which seems very “genuine” and moving, with its quirky and fun moments. This means that while Roberts and Gere’s iconic pairing in “Pretty Woman” might have been quite unforgettable, their chemistry in “Runaway Bride“, nine years after their first film, was still as solid.

Few people do not know the plot to “Pretty Woman“, the modern take on Cinderella, with a prostitute and a well-to-do businessman falling in love with each other in Los Angeles. The plot can hardly get more romantic as Vivian and Edward’s love blossoms in spite of their totally different social standings. When he was cast, Richard Gere was already an established heart-throb in the industry, with such films as “Days of Heaven” (1978), “American Gigolo” (1980), and “An Officer and a Gentleman” (1982) behind him. It is unbelievable to how many A-list actresses the role of Vivian was offered, and how many turned it down (sometimes, on very logical pretexts considering the script content).  It was offered to Molly Ringwald (“The Breakfast Club” (1985)), Sandra Bullock, and Michelle Pfeiffer, who all turned it down, undoubtedly regretting their decisions later, because the role rocketed Roberts to unparalleled stardom. Winona Ryder and Drew Barrymore were considered too young, and Diane Lane would have been cast if not for her scheduling conflict. Julia Roberts was fresh out of “Steel Magnolias” (1989), previously appearing in “Mystic Pizza” (1988), and now looking for a break. Roberts is perfectly cast here, in “Pretty Woman“. No other actress could have played a prostitute in a film like Roberts, carrying her innate dignity throughout, and projecting both sexiness and mischief, and mystery and shyness, fusing playfulness with emotion. IMDb reports that Gere did not really want the role, but when Roberts “slid him a post-it note with the words “please, say “yes”, he accepted. It is good that he did.

The onscreen chemistry between Roberts and Gere in “Pretty Woman” is legendary. It is galvanising and memorable. What works best in that film in terms of romance is that the characters bring the best in each other. Gere as Edward makes Roberts as Vivian calmer, sweeter, and, happier. In turn, the character of Vivian makes Edward find his “spark” in life, and makes his life more exciting and fulfilling. These things may not be thought when watching the film, but they are just felt whenever the two are together and interacting. Both are relaxed and find pleasure in each other’s company. What starts as an interest – with Edward seeking sexual excitement/beauty and Vivian seeking financial stability, turns into them finding the inner, finer features which they lacked. 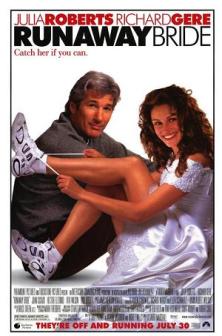 Nine years after “Pretty Woman“, we find Richard Gere and Julia Roberts cast again, this time in “Runaway Bride“. This film is a worse than “Pretty Woman“, and in many respects. However, unlike what most critics said at that time, this is not due to the reduced chemistry between the leads. In fact, it could be argued that Roberts and Gere’s onscreen chemistry in “Runaway Bride” is as strong as it has ever been. Rather, the fault here lies largely with the unimaginative script and with too many corny elements present. Briefly, in “Runaway Bride“, the reporter (Richard Gere) writes a piece on one Maggie Carpenter (Julia Roberts) branding her “the runaway bride” because she has allegedly run away from her previous three weddings. Now out of job because of his defamatory allegations, the reporter meets Maggie in person, determined to know whether she will run away from her fourth wedding, but, inadvertently, falls in love with her.

“Runaway Bride”‘s dialogues are witty, funny and fast-paced, and the production even brought the same supporting cast here that appeared in “Pretty Woman“, such as Hector Elizondo. However, ultimately, the film fails to convince. One of the problems is that the script is written in such a way that Maggie and Ike do not have any initial physical contact, and become true enemies early on in the film. Their mental battles are fascinating to watch, but because there are so many secondary characters here and the script is confused as to its purpose, both Roberts and Gere cannot give much room for their characters’ love story to develop fully. In fact, it is only into the film’s second hour that we finally see Maggie and Ike alone, driving in a car.

On the other hand, arguably, both Gere and Roberts do everything right in “Runaway Bride”, and their characters’ romantic scenes are the best in the film. There are only roughly three truly memorable scenes with the duo: the couple’s first meeting, Maggie’s trying of the wedding dress, and the coupe’s kissing at the altar. These scenes are filled with much emotional intensity and meaning, as the characters battle their emotions and do not want to give in to the charms of the other. It does not become too banal, and is actually sweet to contemplate. As in “Pretty Woman“, Maggie and Ike see in each other what one secretly desires, but cannot admit to him(her)self. Edward and Ike look for someone to “spice-up” their lives, so that their lives do not become too monotonous, and Vivian and Maggie secretly search for a man who can give them some direction and grounding. In both films, the couples turn their lives around for each other, and start seeing different sides of themselves.

So, what is the secret behind Roberts and Gere’s memorable attraction/chemistry? I will venture to suggest that it lies in their personalities, and, even, in their respective star signs. Their personalities (actually both on and off screen) seem different, but, that is the reason for their irresistible magnetism towards one and another, and when in a couple, the belief that this duo will have a very durable and exciting relationship. In both “Pretty Woman” and “Runaway Bride“, Gere plays the serious, analytical and logical characters who try to make sense of the free-spirited, wild, sexy and mysterious characters played by Julia Roberts. Deep inside, Roberts’ characters are attracted to Gere characters’ stability and inner integrity, and the characters played by Gere are mesmerised by all the sexiness and quirky vibes coming out of Roberts’ roles. The main attraction lies in these hidden elements, and they are felt. The relationship between Edward and Vivian, and between Maggie and Ike in the respective films may not be that completely mind-blowing, totally passionate and all-consuming love story. However, it still feels as that one love which would be based on respect, very close companionship, desire to better oneself and the other, and on the wish to prolong that relationship which makes both relaxed and comfortable in their own skin. Incidentally, one of the main points of the “Runaway Bride” story is that Maggie there realises that she has never been with a man where she could be herself.

Incidentally, both Roberts and Gere, in their films, seem to play out the love story of their respective star signs. Gere, a Virgo, is classic in his charm, being handsome, clever and determined, even if, probably, slightly too judgemental and critical. Roberts, a Scorpio, is mysterious, with hidden emotions, oozing dangerous levels of sex appeal, with maybe a touch of suspicion about her in relation to the outside world. What is interesting is that in both films it is the character played by Roberts which makes the Gere character emotionally aware, and it is the character played by Gere which makes the Roberts’ counterpart be less sceptical of their happiness. Rumours have it now that Julia Roberts and Richard Gere may be in love, and now – in real life. Perhaps, the fairy-tale did come full circle.

Julia Roberts and Richard Gere may have made only two films together, but their visual appeal as a couple is undeniable, and their onscreen chemistry will always be remembered as one of the most complementary and “genuine” ones, even if not totally straightforward or evident. 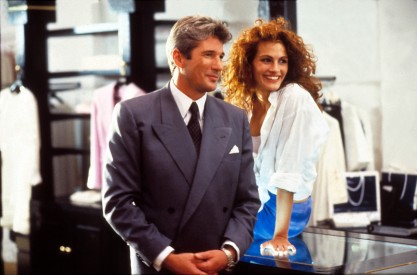