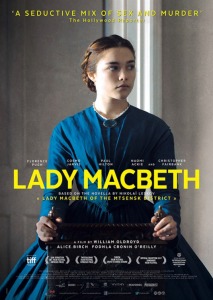 This limited budget production film takes the story of Russian Nicholas Lescov “Lady Macbeth of the Mtsensk District” (1865) as its inspiration to set its own in rural England. Florence Pugh plays a vivacious girl Katherine who is forced into a loveless marriage of convenience with a middle-aged merchant Alexander Lester (Paul Hilton). Bored with her marriage and her duties, Katherine soon takes the liking to one of her husband’s employees, one Sebastian (Cosmo Jarvis), and the two have a forbidden affair in her husband’s absence. The drama unfolds when the lovers are called to account for their behaviour. Director William Oldroyd, relying on a praise-worthy script by Alice Birch, manages in this movie to convey the claustrophobia of a loveless marriage as well as the loneliness of a rural household which awake the feelings of rebellion in young Katherine. Florence Pugh gives an astoundingly good performance as the lady of the house, which could only be described as one of the very best of 2017.

Surprisingly, the film follows the novel by Lescov more or less closely (from weighing games to tomcat references), and only in the end major differences between the novel and the film emerge. For one thing, Pugh could not have been better cast and answers the very description of Katherine given by Lescov in his book. Lescov writers: “Katerina Lvovna, although not a born beauty, was a woman of very pleasing appearance. She was only in her twenty-fourth year; though not very tall, she was well built, with a throat that seemed carved of marble, her shoulders rounded, her bosom firm, her nose straight and fine, her eyes black and lively, her forehead white and high, and her hair so black that it was actually blue-black.” After the marriage, Katherine in the film often falls asleep during her husband’s business meetings, and it is only too clear to a bystander that there are no shared interests between Katherine and her immediate family, who are middle-aged men: her father-in-law and her husband. Katherine loves outdoors and fresh air, while her forbidding husband prefers her to stay in-doors all day.

When Katherine falls for Sebastian in the film, their relationship feels purely sexual, and the film accentuates the sexual element in their relationship, whereas the book is more concerned with establishing their camaraderie and the-meeting-of-the-hearts. In fact, the passionate, almost fatalistic relationship between the lovers in the book makes them almost sympathetic, whereas in the film, the lovers are more alien to each other, despite the fact that Pugh and Jarvis’s chemistry is great. The book says: “Katerina was ready now for Serghei’s sake to go through fire and deep water, or into a dungeon, or to be crucified. So deeply had he made her fall in love with him that there were no limits to her devotion to him.” In the film, Katherine’s love is more selfish, when she says at one point: “I’d rather stop you breathing than have you doubt how I feel.” The book is also filled with dreamy superstition and poetic references, being purely Russian in this sense, for example, there is a passage in the novel which reads: “the air was filled with a certain languor, conductive to sloth, self-indulgence, and obscure desires”. The 2017 film tries to imitate that melancholy poeticism through its breathtakingly beautiful, but very sombre, images, and it is very successful in that.

Apart from a different ending, the maidservant to Katherine also plays a much larger role in the film than in the book. In the film, Anna (Naomi Ackie), Katherine’s maidservant, is almost antagonistic in her behaviour to Katherine. This element of a sinister presence in the household adds a layer of complexity, intrigue and tension to this picture of appearances deceiving.  It is Anna who “tortures” Katherine by keeping her awake while the latter awaits her husband’s return from the men’s gathering, and it is Anna who initially becomes Katherine’s love rival in her pursuit of Sebastian.

Florence Pugh gives the performance worthy of every notice. Her character’s incredulity at her own marriage arouses our sympathy, and then her passion for Sebastian leaves the audience convinced of the character’s understandable desire to lead a free life. Later on in the film, Pugh’s character shows resoluteness and coolness of nerve which are surprising, but some people, even though appearing innocent at the start, then just can rise to the occasion, and it is fascinating to see Pugh’s transformations. If, at the start, Katherine seem to unquestionably follow her husband’s wishes, later she gathers enough inner strength to simulate her husband’s behaviour, for example, giving the exact same commands to the servants as her husband once gave to her.

It is really incredible what director William Oldroyd managed to achieve in this film with the very limited budget. It is also amazing that “Lady Macbeth” is Oldroyd’s first professional film and his past in theatre clearly shows here, for example, in the photographic precision of each shot in the film. Shot in mainly one location in Durham over less than a month, the film is just great visually and aesthetically. Oldroyd went for a cold, pale palette in designing his film, and the decision paid off. From depressing British moors to gloomy rooms in the house, and even to Katherine’s traditional blue dress, everything reminds of some old British/Dutch paintings, and barely hints on the passion and unconventionality restrained inside. The use of sound is also magnificent in “Lady Macbeth”. The sounds of hair brushing, laces tightening, footsteps echoing, chairs squeaking, and doors and windows being opened and shut all give the film the strange aura of enchantment and expectation. Moreover, the fact that production designer Jacqueline Abrahams (“The Lobster” (2015)) and costume designer Holly Waddington (“Atonement” (2007)) were on board to contribute here clearly made a difference.

Some critics note that “Lady Macbeth” lacks suspense, but the story does not lay any serious claims on being a suspense-filled film. The drama and thrill of “Lady Macbeth” does not reside in a who(or why)dunit mystery, far from it. Rather, the film largely relies on a fascinating character study. Firstly, the audience is forced to sympathise with the main character, and then they will try to distance from it. It is the multitude of provoking themes, including the complex master-servant relationship, the true character of people, including their inner hardness, as well as mistaken perceptions, which are fascinating here.

Bold, different, and suffused with rawness and visual realism, “Lady Macbeth” is deserving of more recognition than it has. Some aspects of the story may be too unbelievable even for a Gothic tale, but Oldroyd still produced a film which is both visually mesmerising and wonderfully acted. Florence Pugh takes a central stage in the movie to deliver brilliantly a difficult role which subverts all expectations. 8/10