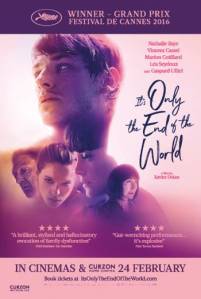 This is my second post for the amazing O Canada! Blogathon hosted by Ruth of Silver Screenings  and Kristina of Speakeasy (check out some of the amazing entries here).

“There I was…after twelve years of absence, and in spite of my fear, I was going to visit them. In life, there are a number of motivations…that force you to leave, without looking back. And there are just as many motivations that force you to return. So after all those years, I decided to retrace my steps. Take the journey…to announce my death.”  Such are the thoughts of a young man named Louis (Gaspard Ulliel) as he takes a plane journey to visit his estranged family after twelve years of absence. Louis suffers from a terminal illness, which means that death is at his doorstep. Few directors working today can convey the depth of emotion through a cinematic lense as masterfully as Xavier Dolan can, and “It’s Only the End of the World” is yet another film which is a proof of that statement. In this movie, Dolan demonstrates that he can exercise visual restraint, but “It’s Only the End of the World” still ends up being as potent, emotionally-moving and convincing as his previous work.

Dolan based his French-speaking movie on a play by Jean-Luc Lagarce titled “Juste la Fin du Monde” (1990), and that fact alone inevitably means that the film feels theatrical and suffers from all the drawbacks (including the lack of sufficient plot development) possessed by many other movies based on plays (for example, see Polanski’s “Carnage” (2011) or Almereyda’s “Marjorie Prime” (2017)). And yet, “It’s Only the End of the World” never loses its appeal, thanks to numerous factors, including the clever direction, excellent work of the very talented cast, and its nostalgic soundtrack.

The openings and endings of Xavier Dolan movies are always things of beauty, and “It’s Only the End of the World” is no exception. As Louis, after his landing, makes his journey in the taxi to his family home, he passes many suburban homes, undoubtedly reflecting on what his life would have been like if he never left. The song here is “Home is where it hurts” by Camille, and it is so evocative that the opening scenes are immediately grabbing. Throughout the film, Dolan never departs from one of his biggest strengths when film-making, the great use of music, and we also hear such effective tracks as “Dragostea din tei” by O-Zone and “Une Miss d’immisce” by Exotica. And this is not even mentioning the beautiful score composed for this picture by the eminent Gabriel Yared (“The English Patient” (1996), “Betty Blue” (1986)).

The moment Louis arrives at the doorstep of his family home, he finds himself in an almost foreign to him and chaotic terrain. His family members talk over each other, never really listening to what another says, and the situation is further compounded since each of them seems to be a larger-than-life personality. Louis’s mother Martine (Baye) is a high-spirited woman that is labelled “nuts” by her daughter Suzanne; Suzanne herself, Louis’s sister (Seydoux), is a trying young woman on a rebellious side, and Antoine (Cassel), Louis’s older brother, comes off as a short-tempered and domineering person. There is this effective contrast here between these family members bickering over nothing among each other and making scenes over trivialities, and Louis’s own inner sad thoughts and the really serious nature of the news he has to deliver to them. Only Catherine (Cotillard), who is not of the family, since she is Antoine’s wife, seems kind and grounded, instantly taking a liking to Louis and establishing a good rapport with him. 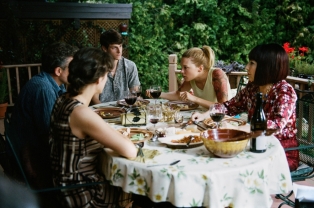 A lot of what really matters in this film/story takes place either in people’s heads or is left unsaid, and it is this moving portrayal of people who care and feebly attempt to say the hardest things which is so well-presented and intoxicating in the movie. Each character in the story tries to say that they care (or deal with the fact that they do) by employing the best methods they can: Antoine – by getting very angry and wanting to shut out Louis; Suzanne – by getting nostalgic, sad and then almost hysterical; Martine – by being direct and comforting; and Catherine by insinuating. And finally Louis, who conveys so much with his eyes alone (for example, sadness and gratefulness), mediates between being a silent observer and a humble supporter.

Upon arriving, Louis, a now thirty-four-year old man, who was once a famous playwright in Paris, also finds that his family members have always eagerly anticipated any news from him, keeping each and every one of his postcards and following his carrier closely. His family apparently thought that he left and would never return, and that their lives never interested him. This realisation further saddens Louis, producing a surge of guilt in him, and makes it difficult for him to communicate to them the true nature of his thoughts, feelings and his news. However, the biggest plot line here is that none of the family members know (at least until the very end of the film) the true reason for Louis visiting them, and it is that intrigue which keeps the film being so interesting.

It is also impossible to over-emphasise the cast here, which probably consists of the biggest French-speaking acting talent active today: Marion Cotillard (“Two Days, One Night” (2014)) as Catherine, Lea Seydoux (“The Lobster” (2015)) as Suzanne, Nathalie Baye as Martine and Vincent Cassel (“Black Swan” (2010)) as Antoine all perform very well. The centre here, though, is Gaspard Ulliel as Louis. That character is the very definition of humility, and Ulliel plays the role so well the audience can immediately recognise and feel the character’s dilemma.

The climax of the film is very effective: everyone, except maybe Louis’s mother, can finally guess (to some smaller or larger extent) the issue troubling Louis. In this context, intuition rather than knowledge is at play, but sometimes the former is more powerful than the latter. In the final scenes, the colour yellow suddenly emerges in the cinematography, probably mentally finally acknowledging Louis as a “walking time-bomb”, waiting to go “red”, if that description is not too crude or disrespectful. The friendly banter at the table suddenly turns into something animalistic as truth tries to emerge.

It takes some patience to follow “It’s Only the End of the World” to its end, but the rewards are immense, especially on the emotional side. Playing all its cards right, the story is trying to dissect a dysfunctional family, while touching movingly on such big themes as the importance of family and the fleetness of life (memento mori). Sometimes, it is an exercise of poetic contemplation, at other moments, it is a melodramatic catharsis. In the end, “It’s Only the End of the World” is an emotional and moving film which is as much about end-of-life reflections as it is about the failure to communicate and misunderstandings that sometimes ruin the happiness of people, even if that happiness resides solely in the chance to say one’s final goodbye. 8/10