“There is more than one kind of freedom, said Aunt Lydia. Freedom to and freedom from. In the days of anarchy, it was freedom to. Now you are being given freedom from. Don’t underrate it.” (Atwood, 1985:34)

“Humanity is so adaptable, my mother would say. Truly amazing what people can get used to as long as there are a few compensations.” (Atwood, 1985:283)

The 2017 dystopian web TV series is based on an award -winning novel of the same name written by Margaret Atwood in 1985. It is about a young woman, Offred, who recounts her time living under the totalitarian regime of Gilead, where women have few rights and their main function is to reproduce in a controlled environment. Pronounced “a TV sensation” overnight, “The Handmaid’s Tale” had 10 episodes (although there is still Season II to come!), and starred such recognisable names as Elisabeth Moss (“The Square” (2017)) and Joseph Fiennes (“Shakespeare in Love” (1998)). I will review the series paying special attention to its faithfulness to the original novel and to the philosophical ideas behind the story.

If such science-fiction films as “Logan’s Run” (1976), “1984” (1984) and “Never Let Me Go” (2005) were more or less gender-neutral, then “The Handmaid’s Tale” is more oriented to women’s issues. The authoritarian Republic of Gilead (the idea of which came to the author when she lived close to the Berlin Wall) is a kind of place where no independent modern woman should want to be. Nearly overnight, women, who are not married to Commanders or other high-ranking men, were stripped off of their rights to property and family, and generally divided into four groups: (i) handmaids (who are supposed to be attached to various families of Commanders and bear children in a controlled environment), (ii) Marthas (who serve as domestic servants to Commanders); (iii) Aunts (who, essentially, supervise handmaids and believe in “traditional” values) and (iv) “unwomen”, who were sent to the Colonies to slowly die while working. However, it will be a mistake to view the novel, and the movie, as a purely feminist account. As Margaret Atwood herself stated, the point of the novel is to present women as human beings, with their own failings and a variety of behaviour, rather than as perfect beings who are victimised.

Our heroine here is a handmaid by the name of Offred (Moss). Offred means that her Commander’s name is Fred, and “off-” denotes belonging. She is the property of the household where Fred Waterford (Fiennes), the Commander, and his wife Serena Joy (Yvonne Strahovski) are in charge. In the ten TV episodes, we: follow Offred as she goes on her shopping duties with another handmaid Ofglen (various Episodes); view the “ceremonies” (or sexual acts) between the Commander, his Wife and Offred (the key is to become pregnant for a handmaid, which is rare) (Episode 1); are presented with the scenes of a birth of a baby (Episode 2), as well as with numerous instances of the regime’s “brainwashing” practices, tortures, etc.; we also witness the handmaid’s attempts to find happiness in “moments”, such as by getting intimately close to Nick, Fred’s driver, and by welcoming Fred’s attempts at friendship.

The series’ first episode is probably the best. It is here we are first introduced to the totalitarian regime of Gilead, its practices, and to the fascinating, but horrid world in which handmaids live. The Episode 1 itself starts with the intense pursuit by the regimes’ army of June (later Offred)’s family. The great thing about the series here is that, like the novel, it is not linear (in the book, past and present collide), and the audience is sometimes transported, through flashbacks, to the earlier time when women were still free and enjoyed their leisure. The following three episodes face situations unhurriedly, and there is a lot of reminiscing about past life, nostalgia and the things that handmaids previously took for granted (such as simply jogging or ordering a coffee), but there is also plenty of action, such as in thought-provoking Episode 3, where there is a hint that Ofglen was likely taken to account for her unfaithful-to-the-regime actions.

Even though the intrigue is somewhat lost in the beginning of the series, when it becomes clear to all that Nick is, indeed, an Eye, spying on the household, the series is still interesting to watch. The pleasure of watching is that there are, on the one hand, outward environment and the state of affairs, and on the other – inward beliefs and thoughts of the characters, and these two states are in stark contrast to one another; in a society where glances and little gestures speak volumes, it is fascinating to observe, for example, Offred’s facial expressions or other handmaids’ silent fearful stares.

The-matter-of-fact narrative of the novel is in a way “transported” to the screen. The book is all about taking pleasure in little things and moments, and the author draws attention to wooden floors (the first sentence) and flowers. The series also, through a voice off, tries to show the inner world of Offred. However, from the episode 3, the series seems to forget this plan. Like probably Sylvia Plath’s “The Bell Jar“, it is impossible to convey to the screen the personal dilemmas and the mental anguish of the character here. Atwood’s book is all about an emotional roller-coaster ride, from desperation to some hope and then back again. Even if her heroine speaks almost indifferently, the reader still feels her torment. In the novel, Offred says “I am like a room where things once happened and now nothing does” and “Fatigue…This is what gets you in the end. Faith is only a word, embroidered“. This also means that the intricate debate in the novel on personal autonomy vs. state interests could not get to the screen. Throughout the novel, Offred tries to dissociate herself from her body, and the true extent of the commodification of women is clearer in the book.

Regarding the cast, it should be clear that both Fiennes and Strahovski are too young-looking and attractive to play their respective characters. In the novel, the Commander and his Wife are presented as more of a middle-aged couple who hire one’s average maid. Elisabeth Moss is a perfect casting for her complicated role, and gives a great performance. Her appearance does not attract much attention, but the dignity and quite courage on Moss’s faces just demonstrate the inward rebellion against the regime and its practices experienced by her character. There is some submission on Offred’s face, but also the will to survive and to live. 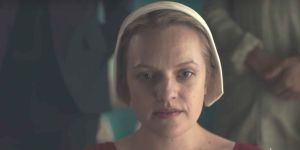 The only complaint could be that, in the book, Offred does not present herself as that sympathetic, rebellious and courageous woman as the series portrays. Thus, the narrative in the book is more thought-provoking. In the novel, Offred says “I’ll incriminate anyone“, “I am a coward. I hate the thought of pain” and “What a relief. It wasn’t me” (when someone is led away to be killed/tortured). She is also openly selfish, jealous and non-resistant to the regime’s brainwashing techniques in the novel, more averagely human, rather than a stoic who resists brainwashing. “I resign my body freely, to the users of others“, says Offred in the book. The heroine’s elusiveness in the book – she never offers her true name there (unlike the series) – is what makes the novel so intriguing, in contrast to the series. Like in Daphne du Maurier’s novel “Rebecca”, the heroine’s true name is “intentionally” unimportant in the book. Moreover, like the heroines in Thomas P. Cullinan’s novel “The Beguiled”, we do not know whether Offred recounts a true story, or if she embellishes and fantasises sometimes.

The biggest mistake of the TV series is to devise so many episodes to tell the story: five episodes would have been more than sufficient to be faithful to the novel and not to miss any important events, but the series does not just want to tell the story in the book, but to come up with its own details, character backgrounds and subplots, often driving the attention away from Offred altogether. This over-ambition produces mixed results. If the first five or so episodes were intriguing enough, if not because of the novelty of the strange environment, the last five episodes have only sporadic flashes of brilliance, and have little to add to the main skeleton of the novel’s plot.

The last five episodes chose to concentrate on the perspectives of the Wife, Nick (the driver) and Offred’s husband, rather than Offred. For example, Episode 6, titled “A Woman’s Place” is about the coming to the Commander’s house of the Mexican delegation and about the rise of the regime’s ideology thanks in part to Serena’s published book. Episode 7 is about the whereabouts of Offred’s husband, something which the book only speculates on, and Episode 8 is about the escapade of Offred and Fred into an illegal recreational club. The perspectives of anyone but Offred are neither that convincing in the series nor very interesting to watch, and Episodes 9 and 10 strangely deviate almost completely from the main premise by, for example, focusing on mysterious packages delivered. It is in these last episodes that Moss really shines as an actress, but, given the otherwise increasingly tedious plot, her performance is refreshing.

The other positive instance here is the ending, which is everything that can be imagined: the thought-provoking defiance of the regime’s inhumane order by a group of handmaids (with slogans like “they should not have given us a uniform if they did not want us to be an army“); and the compelling, almost poetic in its uncertainty, situation arising regarding Offred and her fate. As the book in the end states: “Whether this is my end or a new beginning, I have no way of knowing …And so I step up, into the darkness within; or else the light“.

“The Handmaid’s Tale” is a stylish, beautiful TV adaptation of the novel, with Elisabeth Moss’s central performance being so good as to be unforgettable. From detailed backgrounds to costumes, the TV series conjures up magnificently-presented, thought-provoking scenes, such as those beautiful overhead shots of handmaids in their red and white “uniforms”. The series also stays true to the spirit and letter of the novel, even though its ambition and length stretches way too far. The gist of the story can be gathered by watching the first three episodes, and the rest remains almost discretionary viewings. In terms of gaining philosophical insights, the book remains unbeatable, and the series will be most intriguing and interesting for those who are unfamiliar with the book.

This review was supposed to be part of Maddy’s (see Maddy Loves Her Classic Films) The Small Screen Blogathon, an event-marathon that celebrated TV films or series both classic and modern (do check out other amazing entries!).