“There is very little doubt that the forests cover traces of a lost civilisation of a most unsuspected and surprising character” (from a letter of Fawcett to the Royal Geographical Society, December 1921, Grann (2009) at 55).

Based on a great book by David Grann – “The Lost City of Z”, the film tells a true story of Colonel Percy Fawcett, an eminent explorer who believed that there was a hidden ancient civilisation to be found deep in the Amazon jungle and who vanished with his son in the jungle in 1925 while trying to prove its existence. This beautifully-shot film, directed by James Gray, tries to remain faithful to the timeline of the true story as it focuses intensely on the will and determination of Colonel Fawcett, played with dignity and zeal by Charlie Hunnam. The supporting cast is no other than Robert Pattinson as Corporal Costin and Sienna Miller as Fawcett’s wife, but the biggest appeal of the film is probably still the fascinating true story of one explorer on a mission to prove his cause. However, the film’s length is worrying (circa 140 minutes), and, although the film may shine sporadically as a “biography” film, it is largely disappointing as “a jungle adventure” movie. NB. As I will talk at length about the story, there will be spoilers.

To do justice to the book and to the explorer is to pay equal regard in the film to (i) Fawcett as a man and explorer, and his life journey; and to (ii) Fawcett’s jungle adventures. Arguably, the film only manages to achieve the former goal and not even very successfully, and, regarding any “jungle action” or “Amazon jungle insight”, the movie avoids it whenever it can, which is a pity. Focusing on establishing Fawcett as a family man and explorer is only one way to tell this story, but it is still lacking in many important aspects.

There is every intention in “The Lost City of Z” to follow the life events of Fawcett as faithfully as possible and this is evident from the length of the film. Thus, we are first shown Fawcett in the army and become acquainted with his family situation (his lovely wife Nina), as well as his trip to the Royal Geographical Society in London (circa 1900), where he is persuaded to embark on an adventure to help chart the borders of South American nation states.

Some of the effectiveness of the film here should lie in the uncovering of the powerful and enigmatic personality of Fawcett, but the film is not very persuasive here. Real Fawcett was described as “the last of the great Victorian explorers who ventured into uncharted realms with little more than a machete, a compass and an almost divine sense of purpose” (Grann (2009) at 6). He was often portrayed as a fearless man who had “a virtual immunity to tropical diseases” (Grann (2009) at 106), and who understood jungle and its people like no other. Personality-wise, Fawcett was described as “a loner…but ambitious and headstrong”; “a quick learner”, who “accomplished in months what others took years to do” (Grann (2009) at 39). Any actor playing him should live up to the man, and casting Charlie Hunnam is far from ideal. Benedict Cumberbatch was supposed to portray Fawcett, but dropped out due to scheduling issues. Hunnam looks like one’s typical man of action and determination, when real Fawcett was described as almost unassuming man of a “gentle manner and quiet voice” (Grann (2009) at 45), whose eyes alone may hint at an “implacable resolution” within.

Moreover, although Hunnam looks right as a thirty-year old Fawcett serving in the army at the beginning of the story, he is too young-looking to play Fawcett in his later expeditions. When he disappeared in 1925, Fawcett was 57 years old. It does not help that Hunnam’s acting feels forced and artificial. Many praised Hunnam’s performance, but the actor often speaks in grand statements/slogans with a “public speech” intonation which becomes annoying after some time. For example, during one expedition in the movie, Fawcett (Hunnam) says to Costin (Pattinson): “exit from hell is always difficult, Mr Costin”, and it is not this statement, but its theatrical delivery which is the most memorable.

The positive aspects of the first half of the movie, though, is the good chemistry between Miller (playing Fawcett’s wife) and Hunnam, and the fact that the film tries to clearly show that Fawcett did treat indigenous people of Amazon differently (more compassionately) than his counterparts. There is an interesting scene in the film where Fawcett starts to sing as he and his men are being ambushed by a tribe, and it is true that Fawcett held the motto “die if you must, but never kill” close to his heart regarding indigenous people, believing later that tribal evidence found in the Amazon showed signs of a “sophisticated culture” (Grann (2009) at 137).

For a film that is marketed not only as a biographical drama, but also as an adventure movie about an explorer in the Amazon jungle, “The Lost City of Z” spends minimal time in the jungle itself or showing any fascinating “jungle-action”. Early in the film, Fawcett is sent to Bolivia to chart a river course, and, then, we are shown the men navigating the dangerous river in South America, while trying to ward off attacks by indigenous people. This is probably the expedition where the men found the source of the Rio Verde. The beautiful, intense cinematography, emphasising the sounds of the jungle, is appealing here, but any movements in the jungle are largely confined to a river course in the film, and it is not long before we are again in London, in Fawcett’s family home or in army barracks (the World War I has started).

There is another notable expedition shown when Fawcett paired with James Murray, an Antarctica explorer, to go to the Amazon. Although it is shown how the rules of the jungle are different (stealing food from others is tantamount to murder and leaving an injured man to die alone is simply common sense (Grann (2009) at 21)), any jungle action is hijacked by the tense dynamics between Fawcett and Murray, and the film becomes not so much about the jungle exploration as about the arguments within the Royal Geographical Society and, later, within Fawcett’s own family. 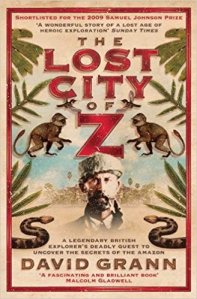 The movie “The Lost City of Z” showed tribesmen as the main danger and we had a glimpse of one large predator. But, the story could have focused more on some “hidden” dangers of the Amazon, because they are very fascinating, even if some of these dangers border something unreal. The book by Grann tells how “easily the Amazon [or the “green hell”] can deceive” (at 15), and how “the river [there] is not what is seems” (at 16). The book also goes some length talking about more hidden dangers like “ceaseless pests”, including mosquitoes, some of which spreading yellow fever and malaria, and about more “fantastical” dangers such as kissing bugs, candiru, tocandira, and poisonous frogs phullobates terrible (Grann (2009) at 81). For example, rumours have it that candiru, a translucent (sometimes almost toothpick-sized) catfish, likes to attack human urethra when people are swimming in some areas of the Amazon rainforest. We are hinted at starvation, heat-strokes and hopelessness bordering madness in the film, but any deeper exploration of these issues would have been welcoming. Even though it would have been difficult cinema-wise to show all the dangers, this omission it is still a missed opportunity for an Amazon exploration film to really delve into some of the jungle’s more secretive aspects.

In its final part, “The Lost City of Z” shows Fawcett’s last Amazon expedition of 1925 when he vanished with his 21 years-old son Jack (Tom Holland). In reality, Fawcett, funded by American newspapers and businessmen, travelled with his son Jack and his friend Raleigh to finally find his City of Z before his competitors. This move by Fawcett may have been his undoing because both young men never experienced real jungle-conditions before, and, if something were to happen to Jack, Fawcett, as his father, would not have been able to abandon him as he would have done so with others (as the laws of a jungle expedition so dictate). The film here does not show so much the jungle adventure as the fictionalised account of the demise of Fawcett and his son. The film spends little time on jungle movements, and more on the final melodramatic bonding between the father and his son, which some say is just inspirational.

Those who are unfamiliar with the story may marvel at this fascinating story of Fawcett and the beautiful shots of the jungle, despite the film’s length. However, those who are more or less familiar with the true story may feel that more focus should have been made on the jungle itself, actions within, its inhabitants, its subtle secrets and insight, and its strong relation to Fawcett. “The Lost City of Z” maybe just one way to tell the story, focusing more on the biographical details of the explorer, rather than his jungle adventures, but Hunnam’s cast and acting are still odd, producing a character who is almost unlikable. 6/10