“It was a logical extension of his fantasy of a long sea voyage with her, of their talking all day as they paced the rolling deck. Logical and insane. And innocent. The silence wound itself around them and bound them” (Ian McEwan, The Children Act).

“The Children Act” is a film adaptation of an acclaimed novel by Ian McEwan, who, incidentally, also wrote the screenplay. In the story, a High Court judge, Fiona Maye (Emma Thompson), comes under immense pressure and has to deal with two rising issues in her life simultaneously – firstly, Fiona faces a family crisis as her husband Jack (Stanley Tucci) states openly that he would like to have an affair with a younger woman, and, secondly, she also becomes involved in a very traumatic legal case of a boy, Adam (Fionn Whitehead), who refuses to have his life-saving blood transfusion because of his religious faith. The film is to be admired for its faithful conformity to the book, as well as for the excellent performance by Thompson. However, it is also apparent that, despite having McEwan himself on board as a scriptwriter, the film also missed its plot in relation to the portrayal of the character of Adam.

If a book writer and a film screenwriter are one and the same person, chances are that a film will be very faithful to its respective book, and it is such a case here. “The Children Act” is a faithful adaptation of its source material, from the film’s emphasis on music to the lines of dialogue and legal jokes taken from the novel. The cast of nearly everyone in the film, especially of Thompson as Judge Maye and of Tucci as her husband, also could not have been better. In fact, Emma Thompson really shines in the role which she must have been born to play. Her Fiona Maye is truly a woman and a judge under family relationship and professional strains, who is sometimes too engrossed in her work to pay attention to her social and love lives. At the beginning of the story, Fiona presided over a difficult case about the necessity to separate a pair of conjoined twins, thereby, justifying the murder of one weak twin, and this is just one of the myriad of difficult cases, involving complex moral issues, that she has to deal with on a daily basis.

However, Fiona’s world is about to be turned upside down when she first hears the legal case of a seventeen year old Adam Henry, who is virtually on his death bed, and she alone can save him. Adam, who suffers from cancer, is vehemently refusing a blood transfusion which can save his life. His refusal is on the grounds that he and his family are Jehovah’s Witnesses and their religion forbids the mixing of blood since blood is regarded as a gift from God. As Fiona hears the case, the time pressure increases, because Adam does not have long to live without transfusion, and, since he is technically a child, a judge can order a forceful transfusion, overriding his refusal to treatment and his claim to dignity. In the film, we first hear interesting debates about the legality of a forceful order to transfuse and what Adam’s religion really tells about transfusion. Then, we find out that Fiona Maye would like to hear from Adam himself before making her decision.

Thus, arguably, all is going well in this film by Richard Eyre (“Notes on a Scandal” (2006)) until Fiona finally meets Adam in hospital. The point of the novel is that Fiona is impressed by Adam, by his poetic zeal, his friendly personality and his strange, almost outdated views about the world. There is an almost immediate special connection established in the novel between the woman who faces a personal crisis and this “lovely” boy who faces his death. However, in the film, there is little chemistry between Thompson and Whitehead, and Whitehead, in the role of Adam, first comes off as an aggressive boy and then an unlikeable person in his passive-aggressive state of mind, almost resembling a younger version of Patrick Bateman from “American Psycho” (2000). Naturally, the audience then does not feel strong sympathy for Adam’s condition, and there is a feeling that Thompson’s character also should not. Even though Whitehead may be described as “handsome”, it does not also help that his acting is unconvincing and he seems to portray someone who is the opposite of Adam in the novel, when Adam is supposed to be almost unconcerned and definitely romantic about his condition and fate, being full of ideas and lively debates. To that effect, when Whiteman says in the film his line “please, don’t go [My Lady], [stay] until they bring my supper”, it becomes hard to believe that Fiona and Adam do not want to part.

Small details go a long way in a movie, but “The Children Act” does not seem to think that way. The point of connection between Fiona and Adam is music, and, in the novel, Adam has a violin in his hospital room, whereas, in the film, Adam has a guitar. Why should the replacement make any difference? This change makes quite a bit of difference, irrespective whether the actor can actually play the instrument. Not only the presence of a violin rightly makes the character of Adam unusual, poetic and old-fashioned, but its exclusion also robs the film of some of the magic of the novel. A guitar is almost a commonplace musical instrument and does not suit the dreamy and strange personality of Adam at all. There is something too classical, unreachable and nostalgic in a violin, and its connection to Adam in the novel definitely reinforces the image of him as being misunderstood by the people of today, maybe because he is too removed and lives with high notions that point to romanticised deaths. As Adam associates himself with English poets of the past, Fiona develops an instinct to protect him and his old fashioned views about the world, to shield him from the vulgarities of modern life. That was also one of the points of the book never touched upon in the film. The same argument applies to the fact that the film decided to substitute letters written by Adam to Fiona for phone messages. A letter written by hand induces this image of a person who still lives in the past and who is not prepared to confront his future, and this is essentially Adam. Therefore, Adam using a phone in the film is almost an uncharacteristic behaviour. 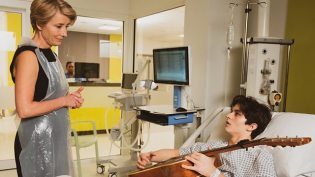 What probably saves this film again in its middle and end is again Thompson’s acting and her character study. Thompson’s Fiona is both an astute and objective judge, and a sympathetic woman underneath, but she is also a person who is on her special path to redeem herself. The fascinating, but tragic aspect of the character is that Fiona is a childless woman who faces her own personal crisis. However, when presented with the case of Adam, she can finally assume a distant role of a mother in some form and, even though not giving birth, can, nevertheless, save a life. This can be contrasted with the film’s beginning when Fiona was accused of murder by newspapers for separating conjoined twins, thereby, killing one. In her mind then comes the time to prevent the painful death of a very talented boy. Even though the novel tells that “it was not her business to save [Adam], but to decide what was reasonable and lawful”, the book also is quite clear about Fiona’s self-blame as she accused herself of “denying the existence to two or three talented individuals”.

For those who have read the book, the film may appear almost uninteresting so faithfully the book was adapted. Near the end, however, the film slightly reworked the book to produce a stronger and more touching finale, even though most may also agree that the final poem of Adam should have been somehow incorporated into the film.

“The Children Act” is a faithful book-to-film adaptation, which is also an interesting story to tell on film because of its legal and moral conundrums and the fascinating character study of Judge Fiona Maye. Emma Thompson’s performance stands out, in particular, as she portrays convincingly both a detached woman and an emotionally-involved judge. On the downside is Whitehead’s unfortunate portrayal of Adam Henry, which makes it hard to understand the growing obsession, and touching connection, between the two main characters, something which is essential to believe in for this film story to succeed. 7/10

9 thoughts on ““The Children Act” Review”