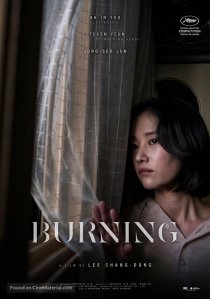 “You don’t have to convince yourself that a mandarin orange exists, you have to forget that it does not exist.” (Haemi, when explaining the art of pantomime in “Burning”).

In Chang-dong Lee’s film “Burning”, Jongsoo (Ah-In Yoo) is a country lad who rekindles friendship and begins a romance with Haemi (Jong-seo Jeon), a girl from his childhood, only then to discover that Haemi vanishes soon after meeting the handsome and wealthy Ben (Steven Yeun). “Burning”, which received much praise at the Cannes Film Festival 2018, is the kind of a film commenting on which people would pride themselves by saying that they liked it, only for others to secretly tell themselves that they do not. Slow-moving or “burning” films with intricate psychological character studies and with unhealthy doses of inexplicability are fashionable nowadays, and, in that vein, “Burning” also would like to take its place among this elite unfathomable group of films. However, the result is a clumsy, uncompelling and excruciatingly tedious film that is as much of a mystery as any non-mystery and that has as much high tension as waiting patiently for a catch when fishing (only then, predictably, not catch anything substantial at the end of the day).

One of the most admirable aspects of “Burning” is the way it explores its characters and contrasts them with one another. The film plays with a love triangle to a surprisingly good effect. It seems we have known the characters of “Burning” all our lives. Jongsoo is one’s boy next door, who is in love with an unusual and free-spirited girl. He does menial work but has aspirations to be a writer, while he also comes to terms with his family’s poor financial positions and his father’s violent past. Haemi is that beautiful and a bit mysterious girl who can capture one’s heart. She is vivacious, in love with travel and Africa, and can fall asleep anywhere. After Jongsoo and Haemi meet one day and sleep together shortly after, Haemi goes to Africa, but she does not return alone. Then, comes to the scene Ben, whom Haemi met during her travel. Now, Ben is everything that Jongsoo is not. If Jongsoo is relatively poor, then Ben is rich. If Jongsoo is wrecked with some worry or other, then Ben is a carefree hedonist. If Jongsoo is portrayed as an ordinary guy who is shy and uncertain about romantic interactions, then Ben is that good-looking guy who emits confidence and sex appeal. Needless to say, Haemi deflects to the arms of Ben to the amazement of Jongsoo. The best moments of the film are when the trio are together in the frame because there is inexplicable tension in every scene, and Jongsoo cannot really relax when interacting with Ben. It may be very odd to draw comparisons here with “The Hunchback of Notre Dame” (1831), but this characters trio can be defined also as that elusive and beautiful dancer (Haemi/Esmeralda) who captures the attention of both – a somewhat hopeless lover who is set on revenge (Jongsoo/Quasimodo) and a handsome man of means (Ben/Phoebus), who also has other romantic connections on the side.

Another great thing about “Burning” is the way it tries to tell things through the context and to accentuate little details in the story to hint at the bigger picture. It is evident that Haemi and Jongsoo have more things in common and are a better match than Ben and Haemi. Haemi and Jongsoo share the same childhood and social positions, whereas Ben is presented as someone wealthy and distant, and who “never even cries”, something which Haemi and Jongsoo do not understand. It is Ben who should feel like a stranger when he and Haemi visit Jongsoo’s home in countryside. However, because of Ben’s higher socio-economic position and his domineering good looks, it is Jongsoo who feels uncomfortable near his home, and becomes even more confused when Ben tells him that his hobby is to set fire to abandoned greenhouses. It also seems that Jongsoo wants Haemi to be happy, whereas Ben is plainly just curious about her. Jongsoo gives Haemi an expensive watch that he won through a lottery, despite the fact than he is relatively poor, whereas Ben manages to give Haemi in one scene a pebble he found on the street, despite the fact that he is rich. What unites the three characters is probably that they are dreamers in one sense or another. Haemi dreams of Africa and talks of the hunger of the soul being the greatest hunger because it entails discovering the meaning of life, an impossible feat, and Jongsoo himself is a writer who is filled with his own ideas. Ben is also a bit out of touch with reality since he lives in his own well-arranged world of fast cars and beautiful girls, and, at one point, gives Jongsoo an advice to simply start living in a moment and to enjoy the beating of his own heart.

However, there are problems with these characterisations too. Each character has puzzling motivations, and probably does not come across the way Chang-dong Lee intended. Jongsoo is almost pathetic as a disillusioned young man who lost his unfaithful lover. When Haemi disappears, he starts asking questions about greenhouses and wells. It is, thus, clear that he is not functioning mentally normally anymore, being more preoccupied with his jealousy and Ben, than with Haemi’s whereabouts and safety. Ben, in turn, is almost too perfect and innocent, while coming across as almost sympathetic, since the evidence against him seems laughable, and Haemi is too wild and nonsensical in her approach to the two boys to really deserve the audience’s sympathy. Thus, the story loses its force since it is unlikely that the director intended that its audience have these impressions of the main characters. The other frustrating aspect of “Burning” is that it never manages to connect its mysterious and inexplicable elements together. Jongsoo receives silent phone calls and discovers a pack of crafted knives at his home. We may guess their origin since his family is also in debt (collectors may be ringing home) and his father has a history of violence, but these elements never convincingly connect to the ending or the concept of the film as a whole.

“Burning” may have presented the socio-economic and class issues in the Republic of Korea from an interesting perspective, and its acting work is very strong. However, the film’s presentation of obsession and jealousy is not convincing enough, and the film loses its vitality when the character of Haemi is no longer in the picture. The vanishing act was the point of the story, and the film thinks that the tension mounts here when Jongsoo tries to locate Haemi and distinguish truth from lies. However, the plot comes off as more preposterous than deep and thought-provoking. Apart from gaining an appetite in the movie (the director tried to accentuate Jongsoo’s search for knowledge that way – his “great hunger”), Jongsoo does not gain much in terms of insight, and nor is there any real tension or intrigue since the evidence for any mystery is so thin as to be hardly there.

However, the real problem of the film is that it is too slow. There is a fine line between a slow-burning film that has tension and intrigue and a completely dull movie which tries to appear mysterious with a preposterous result. Unfortunately, as the film progresses, “Burning” becomes the latter. In terms of plot, the film moves at a snail’s pace, and only becomes to get tense when one hour and thirty minutes have already passed. “Burning” would have been much better as a thirty minutes’ film. Throughout the movie, the audience keeps thinking if their patience is ever going to be rewarded and, to cut the long story short – it will not be. The ending of “Burning “is painfully predictable, while also being a little nonsensical and ludicrous too. To add insult to injury, as the film ends – it becomes very interesting for the first time, but the credits have already started rolling in this two hours and thirty minutes’ exercise in patience.

“Burning”’s cinematography feels original, its acting is very good and its characterisation – admirable. However, “Burning” is also a painfully dull mystery film without any real mystery, and with the predictable pay-off which makes as much sense as the film’s title. To burn something this film first has to develop a spark and it fails to do so on all fronts. The film tries to hint at and suggest something intriguing and dark, but these attempts are feeble and the film does not do much else. By the looks of its ending, “freezing” is a more accurate title for this movie because the film could only freeze its audience’s attention with its monotony, which is also nothing short of a long haul. 6/10