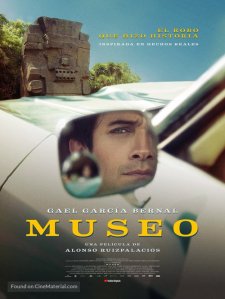 This heist movie is by Mexican director Alonso Ruizpalacios (Güeros (2014)), starring Gael Garcia Bernal (No (2012), The Motorcycle Diaries (2004)) and Leonardo Ortizgris (Güeros). Loosely based on a real story, the film won the Silver Bear for Best Screenplay at the Berlin International Film Festival 2018, and is about two young men in their thirties who still live with their families, while trying to become veterinarians. They decide to break their cycle of personal desperation by robbing the National Museum of Anthropology in Mexico City. What follows is their journey trying to convert their stolen Mayan artefacts into money, while battling personal doubts, since they did not initially realise what their theft might mean culturally and societally for the people of Mexico. Museo is a well-made film with an interesting premise and an unusual dimension to it, but it is also fair to say that it often slides into some obvious melodrama, losing its force and conviction. END_OF_DOCUMENT_TOKEN_TO_BE_REPLACED