Chinese director Zhang Yimou tells in his film, which is based on the novel Wives and Concubines by Su Tong, the story of a beautiful nineteen-year-old ex-university student Songlian (Gong Li) who decides to become a concubine in the 1920s China. After her decision, Songlian finds herself in the palace of “red lanterns” which has “four houses” for her husband’s four mistresses. She soon gets acquainted with the elderly and indifferent first Mistress, with the friendly and seemingly happy second Mistress and with the still young and beautiful, but jealous third Mistress. All is well, or is it? The palace’s strange, centuries-old traditions and customs first bewilder Songlian and then force her most shameful qualities out, as her husband randomly shifts the power between the four houses. Songlian soon finds herself in a miniature society and under the patriarchal dominance which she has never imagined to exist, with her husband employing arbitrary and complex policies of rewards and punishments to keep the mistresses in line. In this dangerous game, Songlian realises that she must learn to handle not only the three previous jealous Mistresses, but also her hostile maid Yan’er and the realisation of a lifetime imprisonment. Raise the Red Lantern is a psychologically-intriguing film about one oppressive world where the competition for power, hopelessness, despair and the weight of guilt all mingle as the palace changes people and makes them into forms it desires and the master has planned in advance. With the exquisitely beautiful cinematography (by Zgao Fei), Raise the Red Lantern is one of the most important films of the 1990s. 10/10

END_OF_DOCUMENT_TOKEN_TO_BE_REPLACED 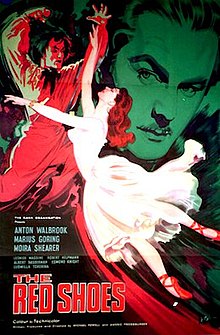 The Red Shoes is about the rise to stardom of a dancer Victoria Page (Moira Shearer) who falls under the strict control of one charismatic, but elusive and mysterious company director Boris Lermontov (Anton Walbrook). Page becomes truly famous after appearing in Lermontov’s ballet “The Red Shoes”, but soon finds herself torn between her new love – composer of “The Red Shoes” – Julian Craster (Marius Goring) and her professional life. The film is brilliant in terms of cinematography, camera-movements and visual impact. The beautifully-designed production and the ballet, that incorporates a story of one girl whose red shoes take control over her life, are memorable. The film also makes certain observations on the creative process of a theatre/ballet production, and on art and artistic input. It asks – what price a person will be willing to pay for the sake of artistic glory and full professional realisation in theatre/ballet? The story of one girl whose red shoes control her (a Hans Christian Andersen fairy-tale) mirrors the story of Victoria Page who, ultimately, has to choose between her romantic interest and her blind devotion to the demands of the man behind the “The Red Shoes” genius – Boris Lermontov.