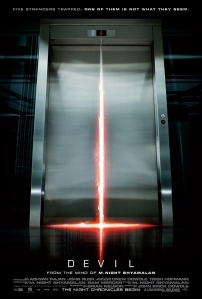 ‘Be sober, be vigilant; because your adversary the Devil walks about like a roaring lion, seeking whom he may devour’ (Peter 5:8).

In ‘Devil’, five strangers, all with dark secrets to hide, are trapped in an elevator of an inner-city office building. As they await their rescue, they start to die one by one in a mysterious way. ‘Devil’ belongs to the genre of films which is my favourite –  the so-called “confined spaces” or “single location” films. From the screen adaptations of Agatha Christie’s ‘And Then There Were None’ (1945), (1974) to ‘Cube’ (1997), ‘Identity’ (2003), ‘Fermat’s Room’ (2007) and ‘Exam’ (2009), these type of films are often intriguing and engaging, often solely thanks to the strength of well-defined personalities portrayed and the fascinating interactions among them.