Last week we saw the release of a tease trailer for the new film by David Fincher Mank (2020). This film is written by Fincher’s father Jack Fincher and is about “screenwriter Herman J. Mankiewicz and his battles with director Orson Welles over screenplay credit for Citizen Kane (1941)”. Films that portray other films, Hollywood or deal with film-making in general are curious since they provide an insight into their own industry. In this vein, we can recall Fellini’s ​8 1⁄2 (1963), Tornatore’s Cinema Paradiso (1988), Hazanavicius’s The Artist (2011), Hancock’s Saving Mr. Banks (2013), Coen brothers’ Hail, Caesar! (2016), and, more recently, Tarantino’s Once Upon a Time in Hollywood (2019). In the list below, I am focusing on 5 similarly-themed films that usually escape this categorisation on the Internet. In no particular order:

END_OF_DOCUMENT_TOKEN_TO_BE_REPLACED

Directed by Matteo Garrone, best known for his raw crime drama Gomorrah (2008), “Tale of Tales” or “Il Racconto dei Racconti” is a fantasy horror film which comprises three main stories seemingly running in parallel. The first story starts with the Queen (Salma Hayek) and King (John C. Reilly) of the kingdom Longtrellis, desperately wanting a child but who are unable to have one, thereby resorting to extreme clandestine measures of killing a sea monster and consuming its heart to have a son, whose identical twin is also the son of a servant woman. Another story tells of the King of the kingdom Highhills (Toby Jones) arranging a tournament to wed his only daughter Violet (Bebe Cave) by making participants guess the large creature whose skin is on the display – the skin is that of a flea. The third story centers on two elderly sisters who live calmly away from the public eye only for their peace to be shuttered when one of the sisters becomes bewitched and transformed into a young beauty (Stacy Martin) who, in turn, becomes the centre of affection for the lustful King of the kingdom Strongcliff (Vincent Cassel).

END_OF_DOCUMENT_TOKEN_TO_BE_REPLACED 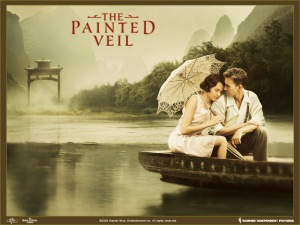 ‘Lift not the painted veil which those who live
Call Life: though unreal shapes be pictured there,
And it but mimic all we would believe
With colours idly spread…’ (Percy Bysshe Shelley)
**SPOILER ALERT**

‘The Painted Veil’ is a moving romantic drama set in China in 1925, and based on W. Somerset Maugham’s critically acclaimed novel of the same name. This is a truly timeless story about the values of love, marriage, fidelity, understanding, etc., while also exploring a clash of cultures, to name just a few dominant themes. Directed by John Curran, this film is, arguably, the triumph of a book-to-film adaptation.