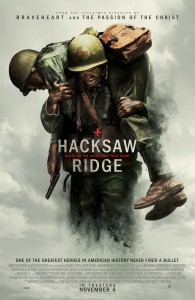 An inspiring story about an unconventional hero? A graphic tale of the brutality of a war? A touching and believable love story? Mel Gibson can do it all, and, believe it or not – do it brilliantly – all in the same movie. His latest film “Hacksaw Ridge” tells the true story of Desmond Doss (Andrew Garfield), a kind, deeply-religious young man who also happens to be a conscientious objector, enlisting to serve in an army, while having a deep conviction against the commission of violence/murder and would not even touch a gun. Nominated for six Academy Awards, including Best Picture, Best Actor and Best Director, “Hacksaw Ridge” is the kind of a film which one can easily define as “great”: a moving, heart-felt story is matched by a dedicated director and a committed actor who do their work exceptionally well.

END_OF_DOCUMENT_TOKEN_TO_BE_REPLACED

N.B. The image in the site header is a background image from Studio Ghibli’s animated film Howl’s Moving Castle [2004].

© DBMOVIESBLOG, 2011-2021. Unauthorised use and/or duplication of any text on this website without express and written permission from this site’s author is strictly prohibited. Excerpts and links may be used, provided that full and clear credit is given to DBMOVIESBLOG with appropriate and specific direction to the original content. In using film posters or other images on this site, no copyright infringement is intended by the site author. Any other usage is carried out under the doctrine of “fair use”.