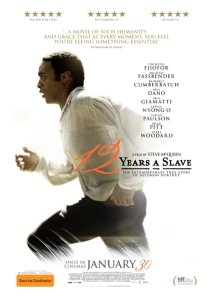 Coming from Steve McQueen (director of ‘Shame‘ (2011)), ‘12 Years a Slave’ can now be comfortably described as this year’s cinematic sensation. The film, based on a self-autobiographical novel by Solomon Northup, tells the story of a black free man, who lives a happy family life in Saratoga, New York in 1841. After he is tricked, kidnapped and sold into slavery in the South, his life turns up-side-down, and a once brilliant musician and an educated family man is now forced to endure an unjust hard life of a slave in Louisiana. The film is very truthful to Northump’s novel, and is filled with so much realism that when one of the characters at the end of the film starts talking about freedom and black people’s rights, the audience may find it hard to believe a word he says – so engrossed they have become in the political/social ideology of that time and in black people’s lives on a plantation in Louisiana.

Before the film’s release, in my pre-view, I debated McQueen’s choice of the topic, saying that much has already been said about the topic of slavery, and thinking it would be hard to reach out and produce something original. And, it would have been difficult to do so, but this is Steve McQueen, a director who does not hide from the difficult, shocking or controversial, and likes to portray things as they are, without any embellishments or omissions. After the director’s underrated ‘Hunger’ (2008) and ‘Shame’, it is a relief to discover that McQueen’s talent is finally dully acknowledged by numerous nominations and awards with ‘12 Years a Slave’. Some even say that ‘12 Years a Slave’ set a new standard for realist cinematography with McQueen and Fassbender pioneering the movement, but it is often sad to point out that such cinematic brilliance has already been set in their previous films (although, maybe on a smaller scale), but, strangely, has gone almost unnoticed. ‘12 Years a Slave’ is nominated for nine Academy Awards this year, and it is a likely contender to win in the “Best Picture” Category.

Having said that, ‘12 Years a Slave’ is probably not a film to watch after a hard day’s work to relax or unwind. Most of its time, the film is very hard to watch, and certain scenes will leave the audience rooted to the chair, if not in shock, than in sheer amazement. It is as though McQueen’s aim was to gain its audience’s full and undivided attention, and he succeeded in that. The director knows exactly how to produce the biggest impact with a controversial topic, and the audience does not even begin to imagine, before the viewing, the sheer force of the impact which ‘12 Years a Slave’ is capable of producing. The film is high on realism. ‘12 Years a Slave’ watches almost like a documentary, and, as one critic noted: the film is probably ‘the most important film ever made on the topic of slavery in the US’. After the viewing, it seems that this statement is almost an understatement, considering the sheer amount and quality of detail of a daily life of a slave which is on the display here. When I said in my previous review that Cuaron’s ‘Gravity’ (2013) is visually spectacular, but forgettable, I might not have meant it in such strong terms, but, upon viewing McQueen’s ‘12 Years a Slave’, maybe I meant just that. After all the special effects in ‘Gravity’ slowly fade away, the silently persisting and shocking themes of ‘12 Years a Slave’ virtually guarantee the iron-solid imprinting in the audience’s minds.

The performances in ‘12 Years a Slave’ are nothing short of brave and powerful, and given the context in which they are played out, it is no wonder to hear of nervous breakdowns of actors on the set, e.g., as in the case of Williams and Fassbender. In fact, beatings, lynchings, family separations and other degradations all take place in ‘12 Years a Slave’, and if the actors are not completely exhausted by the end of the film, their audience certainly will be. Chiwetel Ejiofor initially refused to accept the lead role, but he gave here a truly humane and humble performance of a man who has suffered a gross injustice. Lupita Nyong’o plays a pretty slave girl who becomes the subject of constant attention of her despotic master; and, for a newcomer, Nyong’o’s performance is just brilliant. In fact, Nyong’o and Ejiofor are both this year’s nominees for the Academy Awards. The film also features Paul Giamatti, Benedict Cumberbatch and Sarah Paulson who are all good in their small roles. If there was a real revelation in the film, however, it was probably Michael Fassbender, who plays Edwynn Epps, a cruel plantation owner of Solomon. As can be seen from such films as ‘Jane Eyre’ (2011), Fassbender is capable of portraying arrogance and complete emotional detachment excellently, but his role in ‘12 Years a Slave’ is in a league of its own. Fassbender is so believable in this role of a despotic slave-owner, it is truly frightening to see him on screen: so unpredictable and terrifying his character’s behaviour is. In sum, Fassbender gives the performance of his career, deserving of his Academy Award nomination.

As to any negative things about this film, there could be some noted. Depressingly realistic scenes are stylishly executed, with the lingering shots and the wonderful use of music (composed by Hans Zimmer), but they are arguably one too many. It would have been better to include in the midst of all the horror we see some bright and more light-hearted material, but the film is devised in such a way that its audience is never allowed to catch even a moment’s breath. It is also perplexing to hear so much/and see Brad Pitt’s front credits for this film, considering that he only appears in the movie for a brief period of time. Also, if one thinks that ‘12 Years a Slave’ is this inspirational film about combating slavery in the US, one will be disappointed. The trailer may give that impression, but this film is no ‘Amazing Grace’ (2006), and it is light years’ away from ‘Django Unchained’ (2012).

Overall, it is only too clear that ‘12 Years a Slave’ is a masterpiece of a kind. Although the film can provide for a very uncomfortable and even depressing viewing, it is never short of brilliant in terms of cinematography, acting, directing or overall topic presentation. It is high on realism; intense, nuanced, stylish and incredibly thought-provoking. 10/10