I love scrupulously-put-together documentaries that deal with criminal or social justice and Downfall: The Case Against Boeing is one of these important documentaries. It shows the rise and fall of the engineering company Boeing in the context of two airplane disasters that happened in October 2018 (Lion Air Flight) and March 2019 (Ethiopian Airlines Flight) and involved the same aircraft manufactured by Boeing – 737 MAX. The company’s culture of never hearing bad news and hiding important documents, a new airplane system MCAS and Boeing’s concealment of it from the pilots to save money all led to the total loss of 346 human lives. Starting from the foundation of the company and ending with the lessons drawn from the two disasters and the grounding of the Boeing fleet, Downfall painstakingly shows every development in this tragic story, demonstrating the full extent of the American corporate greed. Treating everything as “mere business” is very dangerous, especially when human safety is concerned and human lives are potentially at stake.

END_OF_DOCUMENT_TOKEN_TO_BE_REPLACED

Any film or documentary that centres on identical twins and their relationship is fascinating in its own right, but if that film or documentary also involves the case of total amnesia, dark secrets and completely buried past, then it becomes one of the most interesting ever filmed (at least for me). Tell Me Who I Am is based on a memoir of the same name by twins Alex and Marcus Lewis, and Joanna Hodgkin, and tells the real story of Alex Lewis, who lost all his memories when he was involved in a motorcycle accident at the age of 18. From that age onwards, Alex had to rely on his identical twin brother Marcus to tell him everything – from how to tie his shoelaces and ride his bicycle to who he was and what were the relationships inside his family. As time passes in the story, however, Alex starts to doubt that Marcus tells him everything. Tell Me Who I Am is too brutal in its portrayal of the truth and distressing because of the subject matter, but it is also a fearless exploration of our reliance on memory that is always an important element dictating our sense of identity and our relationships with others. The documentary presents a powerful and often fragile relationship between two identical brothers torn apart by a dark family secret.

END_OF_DOCUMENT_TOKEN_TO_BE_REPLACED

This is a moving documentary that explores the life of actor Anton Yelchin (Star Trek (2009), Green Room (2015), Thoroughbreds (2017)), from his birth in Russia to the champions of figure skating to his last films made. This is an engaging and respectful feature that aims to pay tribute to a person of outstanding acting ability who was taken too soon (died on 19 June 2016 when he was crashed between the brick wall and the fence when his car rolled back on him in his own parking space at home in Los Angeles). Through his own footages, as well as the interviews conducted with his parents, close friends and co-workers, we find out what kind of a person Anton really was – extremely devoted to his loving parents, loyal to his friends, kind, generous, curious, intellectual, funny, goofy and passionate about many aspects of life. He possessed great charisma and acting skills, having started acting at a very young age and then later acting alongside such stars as Anthony Hopkins, Robin Williams, Albert Finney, Jodie Foster and Willem Dafoe, to name just a few. It is safe to say that, given his talent, he was just on the brink of “breaking through” in his career and just needed that one very successful and big movie that will escalate his career much further, a movie that, sadly, will never now come. By recognising him as an absolute star now, we can at least pay tribute to this potential, to the person who was so passionate about acting and films (trying his hand at directing too!) and whose kind, curious and sparkling personality will always be remembered.
END_OF_DOCUMENT_TOKEN_TO_BE_REPLACED

This story would have been nice fiction if it were also not so very true. This awards-winning documentary details the real story of Frederic Bourdin, a French confidence trickster, who impersonated Nicholas Barclay, a boy from Texas, who, in turn, vanished without a trace when he was thirteen in 1993. This documentary is really akin to some fast-paced and compelling thriller, and one has to remind oneself that the events depicted actually happened. But, how could they have, really? And what may a twenty-three year old French man found in Spain have in common with a thirteen-year old American boy who disappeared from his home in 1993? At first glance – nothing at all, and, at second glance – perhaps the desire to be found and loved. Bart Layton (American Animals (2018)) raises many issues in his documentary, making it personal, compelling and suspenseful.

END_OF_DOCUMENT_TOKEN_TO_BE_REPLACED 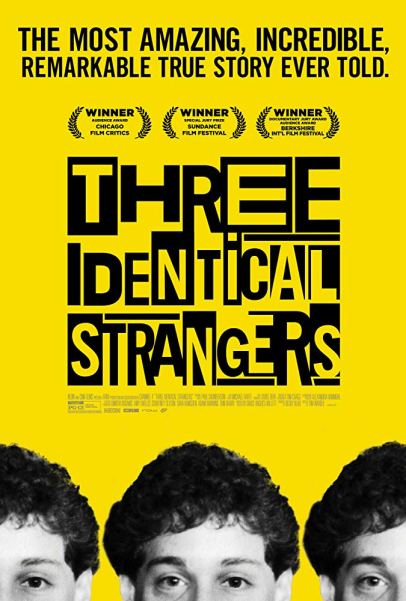 Tim Wardle’s “Three Identical Strangers” is a documentary about an incredible true story of three identical brothers (David, Eddie and Robert) who were separated shortly after birth and who then get to know each other for the first time at the age of nineteen through an incredible reunion. However, the documentary is also about much more than this. The incredible reunion of the triplets is just part of the story’s package to amaze. As we see further, after the triplets’ reunion, the documentary delves into the nature/nurture debate, uncovers the previous troubled lives of the separated triplets, and then, finally, presents one shocking revelation. In that vein, the documentary first amazes its viewers, leaving an unforgettable impression, and then profoundly shocks, raising an outrage inside every viewer who has a heart.

END_OF_DOCUMENT_TOKEN_TO_BE_REPLACED

“Nobody gets justice. People only get good luck or bad luck” (Orson Welles). It seems that this quote is particularly applicable to the story, where one financial institution based in Chinatown, New York – Abacus, became the centre of the government’s prosecution in 2012, and still remains to this day “the only US bank indicted for mortgage fraud related to the 2008 crisis”. Perhaps, Abacus just has not been lucky, but did they really deserve such a massive, million-dollar prosecution against them, with definite prison sentences hanging over their heads if they found convicted? No. They say that “selective justice” is the worst there is, but what is here even more shocking is that “the targeting for justice” by the American government was not too unreasonable – Abacus was both small enough and, actually, – foreign enough. Hence, the justification for all the criminal charges, whereas other massive banks committing even worse crimes can escape with a fine. Director Steve James made this thought-provoking documentary about one small financial institution’s fight against injustice and it already has the distinction to be nominated for an Academy Award. This well-made documentary piece, packed with insightful interviews, fascinating legal processes, human stories and warmth towards other culture, is a real eye-opener.

END_OF_DOCUMENT_TOKEN_TO_BE_REPLACED 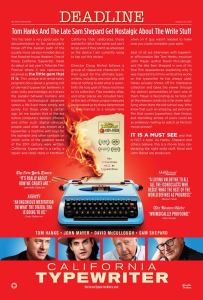 Narrated by Tom Hanks, John Mayer, Sam Shepard and David McCullough, among others, “California Typewriter” is an insightful documentary about the particular loss which technological advances are capable of causing. One small family-run business in California revolves around the selling and mending of typewriters, and still believes in the power and value of typewriters in today’s world, which has become dominated by personal computers and digital technologies. Through the interviews held with various people, we realise the particular value which typewriters can still bring into this world as well as get to know the fascinating history of typewriters.

Growing up around typewriters, this documentary resonates with me personally and makes a very persuasive argument about the value embedded in old technological processes and machines that we leave behind. “California Typewriter” opens with the crime scene of a typewriter being intentionally destroyed by a speeding car in 1963, and from that point on, as the narrator says, a typewriter stopped being one thing and became something totally different. This scene cuts to a present small Californian business that still sells typewriters – California Typewriter. The head of this business is Herbert L. Permillion, III, while their star Kenneth Alexander is a master of typewriters’ repair. Obviously, the business is not doing well, and its failure to generate enough interest in typewriters is contrasted with Apple’s new products launch events where the frenzy and long queues for new Ipads start the day before at night. Then, we meet people who are still in love with their typewriters (an avid typewriters collector, a song-writer, a book-writer and a metal sculptor), and hear why they prefer their machines to any other alternatives. And, there is even the Boston Typewriter Orchestra that performs music on old typewriters!

END_OF_DOCUMENT_TOKEN_TO_BE_REPLACED

Directed by Carol Morley, “Dreams of a Life” is a documentary film telling a real case of Joyce Vincent, a 38 year-old woman who died alone at her bedsit flat in London in December 2003, but her body had not been discovered until late January 2006. When the body of Joyce was discovered, it was badly decomposed; a TV and heating in her room were still working; and Christmas presents were neatly arranged beside her, although covered with the three-year old layer of dust. Joyce has always given the impression to be a well-spoken, vivacious, attractive and confident woman; giving this impression of someone “who is probably living somewhere a better life than anyone else around”, although her mysterious nature did surface from time to time. This made the Joyce Vincent case even more prolific in the UK, and it sparked national outrage, with people failing to understand how it is ever possible for someone so relatively young, attractive and friendly to die in one’s home in a populous area of London, and not be discovered for three years. Now, people, especially those living in big cities, like London, pride themselves of being well-connected, such as through Internet, and the case of Joyce shows a darker side of living in a world which is, although better connected than ever, is sometimes too self-absorbed to pay attention to the environment around.

END_OF_DOCUMENT_TOKEN_TO_BE_REPLACED

Support FILM MAFIA with a tiny monthly pledge here! *** (out of five) I Am Heath Ledger is a cinematic portrait of Ledger the artist. Devoid of gossip and any hint of salaciousness, it will disappoint the TMZ crowd but should prove rich for film students, particularly those of the art of screen acting. It […] via I AM HEATH LEDGER — Film Mafia END_OF_DOCUMENT_TOKEN_TO_BE_REPLACED