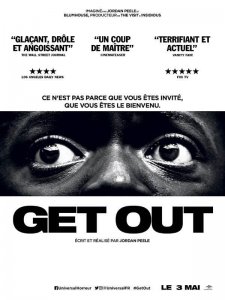 “Get Out” is one of the best-reviewed films of this year. It is a debut film of director Jordan Peele, and has a dedicated, up-and-coming cast to match the film’s ambition. In this film, which is part psychological horror and part societal critique, Chris and Rose (Daniel Kaluuya and Allison Williams), an interracial couple, go to visit Rose’s parents upstate. It would be the first time that Chris meets Rose’s parents and he is visibly nervous. Soon upon arriving, Chris is overcome by the atmosphere of unease all around, questioning whether he is really that welcomed in the neighbourhood. Despite elements of brilliance in setting the atmosphere, unfortunately, the film strays half-way through from its initially brilliantly-presented social horror into some mediocre overt-hostility premise, and ultimately leads to a predictable and unimaginative ending.

As a social satire incorporating discussions on race, the film is top-notch. As one critic put it: the director looks “at those who profess their lack of racism, but only do so if they can maintain their dominance over black people in the most insidious manner possible” (Matt Goldberg). In that way, the film is indeed thought-provoking, raising interesting issues, and you can feel this “white power” critique from the very first scenes when a police officer on patrol asks Chris for his ID even though his girlfriend was driving the car. Another funny thing is that Rose’s parents keep black servants, even though they allegedly have an excuse for doing so and profess that they “would have voted for Obama the third time”.

Now, as a social horror, “Get Out” also starts extremely well, even brilliantly. From the moment Chris steps into this new-to-him neighbourhood, the feelings of unease, discomfort, apprehension and strangeness are everywhere. The film maintains this theme of “the unknown there to get you” the same brilliant way as such films as Forbes’s “The Stepford Wives” (1975) and Polanski’s “Rosemary’s Baby” (1968) do (both written by Ira Levin). Chris makes his move from his R’n’B/rap-charged town apartment to a remote white community, and the contrast could not have been more pronounced. He steps into the uncharted territory where appearances deceive and dangers are camouflaged and presented as kindness and benevolence. The creepiness of the story could not be over-emphasised and some scenes are really well-done, such as when Chris meets another African-American Andrew Logan King (Lakeith Stanfield). The eerie atmosphere of the film is also due to the music. For example, the film begins and ends with the song “Sikiliza Kwa Wahenga,” a Swahili phrase that means “listen to [your] ancestors”, but the lyrics also translate to “something bad is coming – [you have to] run”.

Psychologically, the film is also thought-provoking. There is an evident discrepancy in the film between Chris’s troubling inward feelings about the situation and the outward appearance of normality, and this contrast of confused messages is interesting to watch. Coupled with this is some Freudian psychology and hypnotism, which taps into Chris’s childhood trauma, and we are left with a seemingly perfect psychological-horror film. All this, of course, would not have been possible without the excellent cast. Daniel Kaluuya, who is now, incidentally, in the cast of Steve McQueen’s “Widows” (2018), does a good job. It becomes easy for the audience to mentally associate themselves with his character as Chris is so likeable. Allison Williams, who looks like young Jennifer Connelly, also has her hands full here, and performs well.

However, unfortunately, all the guessing, intrigue and suspense, mixed with humour and surrounded by well-developed characters, does not come to much. This is because the film strangely decides to “spice things up” a bit about thirty minutes into, and instead of following this subtle social horror genre, slides into one’s ordinary slasher-flick, undermining the clever development of the past thirty minutes or so. By focusing on outwardly and “superficial” threats in its second half, the film distinguishes itself from the social horror of such films as “The Stepford Wives”, but at the expense of losing its prised subtlety and appearing overblown. All this means that as “Get Out” rushes towards the end, it becomes increasingly predictable and unreal. The acting and presentation becomes overly-theatrical, and the so-called twists and scares lukewarm. The ending itself is the biggest disappointment there is, and could have been written by a six-years old. Void of any thought-provoking element, which characterised the film in the beginning, after the initial twist is revealed, the ending is probably one of the most unimaginative there is.

Moreover, on the second glance, “Get Out” is far from being original. Firstly, the film seems to be a re-work of Forbes’s “The Stepford Wives” or Levin’s novel. Peele himself stated that the film provided the inspiration for “Get Out”, but the similarities are just too many to count. In “The Stepford Wives” and in “Get Out”, the main characters are photographers who suddenly find themselves in this idyllic neighbourhood, seemingly perfect and benign, but which harbours dark secrets; who then experience strange phenomena and then try to understand the eeriness of their suburban environment, especially the fact that authorities refuse to help and even conspire against them. The twist endings in both films are also more or less based on the same idea of control. Moreover, there are strong similarities between the ending of “Get Out” and another film “The Skeleton Key” (2005), and the only difference is that “The Skeleton Key” tries to shock its viewers with supernatural ideas, while “Get Out” cleverly toys with societal implications of the story.  And, if this was not enough, the first three minutes of “Get Out” is the same sequence of events as that found in the film “The Invitation” (2015). Both movies feature an interracial couple driving in a car and then hitting an animal, with both being distressed by the event. In “The Invitation”, there is also a couple who transport themselves to a remote location to attend a party whose invitees are strange-behaving and possess ulterior motives.

So, is the film really as great as critics argue it to be? Well, not really. On the one hand, I would recommend watching “Get Out” because of the clever way it presents its social critique and the ingenious way it sets its uncomfortable atmosphere. The beautifully-shot film also has its moments of sheer brilliance psychological horror-wise, and its acting and directing are good. However, on the other hand, it is also a shame that this film borrows so much from its predecessors; is confused as to its main horror theme; and has both predictable twists and a disappointing finale. 7/10