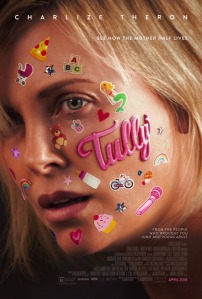 I would like to begin this review by saying that I am a big admirer, even a fan, of Jason Reitman’s work. I think his previous films “Thank You for Smoking” (2005), “Juno” (2007) and “Up in the Air” (2009) are great examples of a particular kind of comedy, where he managed to successfully turn difficult issues into fun and entertaining cinematic material. “Tully” is his newest film, which was penned by Diablo Cody, the screenwriter of “Juno” and “Young Adult” (2011). “Tully” is about a mother of three, Marlo (Charlize Theron), who struggles with her hectic parenthood when she decides to get a night nanny for her new-born girl. After that, Marlo seems to breathe easier and the nanny, Tully (Mackenzie Davis), provides a huge relief for the family, maybe until Marlo and Tully’s ties become too close. “Tully” is an insightful little film and Theron and Davis’s performances are strong, but, as with “Labour Day” (2014), Reitman still faults when it comes to presenting real drama (even though he still excels with his insight and satire).

As was clear from “Thank You for Smoking” and “Up in the Air”, Reitman is a master of insightful comedy/satire. He takes hard-to-talk-about issues, makes an interesting plot around them, and comes up with engrossing “must-see” films. For the most of its duration, “Tully” is no exception. Benefiting from a committed performance by Charlize Theron (“Monster” (2003), “Head in the Clouds” (2004)), the film starts as an interesting contemplation on the trials of parenthood. The plot bares the truth of what it is like to be a parent to small children, and we see Marlo trying to cope both with sleepless nights after the birth of her baby and with the demanding behaviour of her “corky” young son, while trying to run a home and be a wife at the same time. It does not help that Marlo’s husband, Drew, is consumed with his own work, and Marlo herself experiences some kind of a post-natal depression. Thus, the first thirty minutes of the film is a fascinating, even though maybe slightly uncomfortable, watch of a mother trying to make sense of her situation.

The film continues to be interesting when Craig, Marlo’s brother, recommends Marlo a night baby-sitter, Tully, and Marlo finally accepts this proposal, with the nanny arriving and exceeding all of Marlo and her husband’s expectations. Tully is a young, good-looking woman who understands this family’s needs and Marlo herself, who can become Marlo’s best friend or a quiet nanny as the need arises, and who can also cook and clean the house. Does it sound too good to be true? Well, yes, and that applies to the engrossing beginning of this film too. Unfortunately, with the arrival of Tully and the magic moments that follow, the script then stumbles, and towards the end, it does not quite know how to present the drama surrounding Tully to the best effect. Theron and Davis’s performances continue to be impressive, but the drama surrounding Tully simply does not work towards the end. There is an irrelevant scene in the film of a teacher at school comforting both Marlo and her son, as well as tedious sequences of Marlo discussing marital sex with Tully. It is as though the film does not want to deal with Marlo’s “transformation” bravely, and whatever “transformation” is evident after Tully’s arrival, it is presented almost boringly, and the effect is underwhelming.

There is a twist at the end of the film, but even that is not as effective as it should have been. Jason Reitman tried his hand as a drama director in “Labour Day” (2014), but with some very mixed results. And, here, in “Tully“, too, when the script, after some impressive presentation of motherhood with all the applicable satire and wit, calls for some character complexity and real drama, Reitman fails to produce the desired result effectively. Moreover, it does not help that “Tully” portrays fatherhood unflatteringly, and the film’s portrayal of mental illness has already been attacked by the relevant mental health organisations. The upshot is that “Tully”’s insight into parenthood and social satire are brilliant, but its drama and twist complexity are not up there to a desired standard. Moreover, the gist of the material here is so thin that the script could have as well been used to shoot a short film.

“Tully” should work as a social satire and as a more complicated, almost transcendental, drama with a twist, but it only works as the former thanks to both the screenwriters/director’s insight, producing a fascinating portrayal of parenthood, and the all-giving performance from Theron. 6/10

The film’s twist is that Tully is not real and that, at best, she is a “continuation” of Marlo. This is the twist reminiscent of “Fight Club” (1999) and other similar films where alter egos step-up to take the place of a main personality when such need arises. This seems to be what happens in the plot when Marlo imagined (brought to life) a younger, more efficient self who can be both a sexy wife who cooks delicious food and a doting, caring mother all at once. It is even fascinating to see the “appearances” of Tully, because they somehow nearly always happen when Marlo watches a sex-themed show in the evening, and, perhaps, a Freudian case could be made for the emergence of Tully when Marlo is in a particular state of mind. However, the problem of including this “Fight Club“-like twist here, in this social comedy film, is that it will never have the same effect it would have had had it been included in a straight thriller or drama. This is because, in “Tully“, all the attention is on Marlo’s parenthood struggles and the glimpses we get into a life with one’s new-born. Moreover, Reitman fails to make Marlo very sympathetic at the end of the film, and Marlo’s transition to a state where she does not need Tully anymore is not altogether clear.